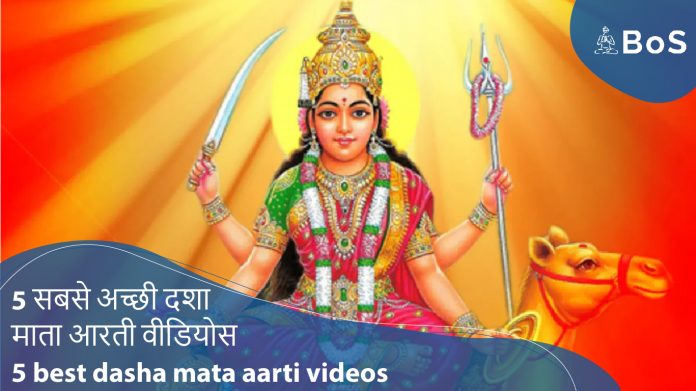 In Hinduism, worship and fasting of Dasha Mata are considered to provide happiness, prosperity and success along with providing freedom to the person and his family from problems. Women worship Dasha Mata for economic status and peace in the family. By doing this, Dasha Mata is worshiped to improve the deteriorating condition of the family.

Dasha Mata is worshiped on the Dashami date of Krishna Paksha of Chaitra month. Women bring a string of 10 strands of raw cotton and apply 10 knots in it and worship the peepal tree. After worshiping Dore, Nal hears the story of Damayanti at the place of worship. After this, tie this string around the neck. After the pooja, the women conduct turmeric kumkum raids at home. At the same time while taking fast, one takes food. Does not use salt in food. On this day, cleaning the house, throwing the garbage all out, improves the condition of the house. Dasha Mata sudharati hae parivaar ki dasha. Agar aap bi chahte hae apne paarivar ki daha sudharna to aaj hi shuru kijiye दशा माता आरती.

There are ups and downs in every person’s life. Many people come to this life for a short time, so many people struggle with life-long troubles. In such a situation, the life of his family worsens. If the condition of a person’s life deteriorates, then he has to face many troubles, and when the condition is good, his life is pleasant. Dasha Mata is worshiped to improve this deteriorating condition of life.

According to the mythology, King Nal and Queen Damayanti ruled happily at one time. They had two sons. The state prajya was happy. Once upon a time. A Brahmin came to the palace and asked the queen to take Dora’s mother-in-law. Maid said – Maharani ji, on this day all the Suhagan women worship and fast to Dasha Mata and tie this thread around the neck, which brings happiness and prosperity in the house. The queen took the dora and tied it around her neck by worship. A few days later Raja Nal saw Dora tied in Damayanti’s neck and asked why did you tie this Dora even after having so much jewelry and while saying this, the king dragged Dora out of her neck and threw it away. The queen raised Dora and said that it is Das of Doraemata, you did no good by insulting her.

Dasamata came as an old woman: In the night, in the dream of the king, Dashmata came in the form of an old lady and told the king that your good condition is going and bad condition is coming. You have insulted me. As the days passed, gradually the king’s chic, wealth and happiness began to be destroyed. The condition became so bad that the king had to leave his kingdom and go to another state in disguise and ask for work. On the way, the king saw the palace of a Bhil king. There the king left his two children safe and the king-queen moved forward. The king’s friend’s village arrived. When he went to a friend, he was very well received. Friend put him to sleep in his bedroom. In the same room, the precious necklace of a friend’s wife was hung on a peg of peacock shape. At midnight, the queen opened her sleep and saw that she was swallowing lifeless peg Heer. Seeing this, the queen immediately woke up the king and both of them considered what they would answer in the morning. So, we should leave here at this time. The queen-king left from there at night. When the friend’s wife did not lose in the morning, they accused the king of stealing. Thus many hardships continued in the lives of King Nal and Queen Damayanti.

One day while passing through the forest, Raja Nal saw the old woman with the same dream, then he fell at her feet and asked for forgiveness and said, “Mai, Please forgive me.” I along with my wife will worship Dasha mata. The elder, while forgiving him, told him the method of worshiping Dashama. On the Dashami date of Krishna Paksha of Chaitra month, the king-queen worshiped Dasha mata according to his strength and tied Dasamata’s thread in the neck. With this, his condition improved and the king regained his kingdom.

What to Do, What Not to Do on this Day