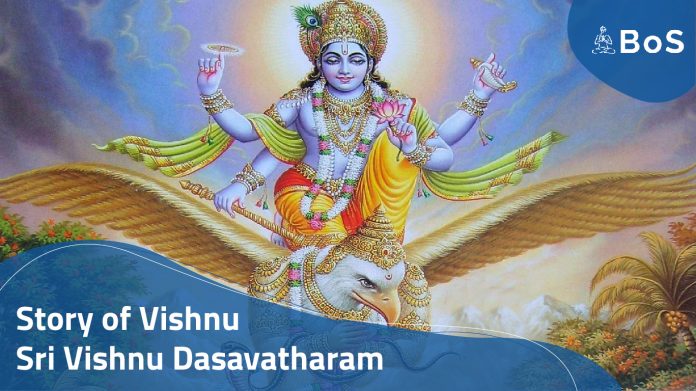 Story of Vishnu: In the Puranas, there are two forms of Hindu God Vishnu. In one form, he has been described as very calm, happy and gentle and in the second form God has been described as very terrible. Where Shri Hari is sitting in a comfortable posture in the form of Kaal Sheshnag. But whatever the form of the Lord, his heart is soft and then only he is called Kamalakant and Bhaktavatsal.

It is said that the calm face of Hindu God Vishnu inspires the person to remain calm in difficult situations. The solution to problems can be successfully found by remaining calm. The scriptures have written following about Vishnu Bhagwan:

It means Lord Vishnu in a calm sense while resting on Sheshnag. Seeing this form of Lord Vishnu, this question arises in the mind that how can one be so quiet while sitting on the king of Snakes? But he is Vishnu Bhagwan and everything is possible for him. Shri Vishnu has many other powers and we are very sure that there are certain Vishnu Bhagwan Facts which may surprise you.

In the scriptures, three forms of God i.e. Brahma, Vishnu and Mahesh. Brahma is the creator of the world, Vishnu nurtures, and Mahesh means Shiva who destroys. Vishnu literally means pervading all. According to Vishnu Purana, any poor person can also become rich by the grace of Lord Vishnu.

1. The four hands of Vishnu depict these four stages of life, first is the pursuit of knowledge, second is the family life, third is the return to the forest and fourth is renunciation.

2. The peacock feather on his crown represents his Krishna incarnation. It is also believed that Vishnu has taken this from Lord Krishna.

3. The Srivasta on the chest of Vishnu shows his love for Devi Lakshmi.

4. Vishnu is considered to be the nurturer of the world. When in the world, destructive powers increase then, Vishnu takes an avatar and destroys them and establishes religion. Due to these qualities, he is the lord of the gods.

Varaha Avatar is the third incarnation of Lord Vishnu according to Hindu scriptures. In this incarnation, God took the form of a pig and killed Hiranyaksha demon.

Kurm Avatar is also called ‘Kachhap Avatar’. In this, Lord Vishnu appeared as a tortoise. In the Kachhap avatar, Shri Hari handled the Mandar Parvat on his armor in the ocean of Kshirsagar. With the help of Lord Vishnu, Mountain Mandar and Vasuki Sarp, fourteen gems were found by the gods and demons in the churning.

According to the scriptures, the fourth incarnation of Lord Vishnu is Narasimha. In this incarnation, Lakshmipati Nar-Singh meant half lion and half man. In this, the face of the lion was that of a lion and the body was of a human being. In Narsingh avatar, he killed his father demon Hiranyakashyap to protect his devotee Prahlada.

Vaman is the fifth avatar of Lord Vishnu. In this, Lord came to the earth as a Brahmin child and asked for three steps of land in charity from King Bali, grandson of Prahlada. In three steps, Vaaman broke the pride of Raja Bali by measuring all three worlds with his foot.

Parashuram, an incarnation of Vishnu, was Renuka, the daughter of King Prasenjit and son of Bhrigu dynasty Jamadagni. He was the sixth incarnation of the Sri Vishnu Dasavatharam. Because he was Jamadagni’s son, that’s why he is also called ‘Jamadagnya’. He was an ardent devotee of Shiva. Lord Shankar was pleased with his devotion,  and gave Parshu weapons to him. His name was Rama and because of taking Parshu, he was called Parashurama. It is said that he had destroyed the Kshatriyas many times. He was born to save the world from the egoistic destruction of the Kshatriyas.

One of the ten incarnations of Vishnu is Maryada Purushottam Lord Shri Ram. Maharishi Valmiki wrote the story of Rama in the Sanskrit epic Ramayana. Tulsidas composed the devotional poetry Shri Ramcharitmanas. Ram was the son of King Dasaratha of Ayodhya and his first queen Kaushalya.

Yashoda Nandan Shri Krishna was also an incarnation of Vishnu. Bhagwat Granth contains stories of Lord Krishna’s past times. He has many names like Gopal, Govind, Devki Nandan, Vasudev, Mohan, Makhan Chor, Murari, etc. He appeared in Mathura as the son of Devaki and Vasudeva. Sri Krishna played a big role during the war if Mahabharata. He was the charioteer of Arjuna in this war. His sister Subhadra was the wife of Arjun. He preached the Gita to Arjuna before the war.

Buddha is also one of the tentacles of Lord Vishnu. He is also called Gautama Buddha and Mahatma Buddha. He is considered the founder of Buddhism. Buddhism is one of the four major religions of the world. He was born as the son of Shakya Naresh Suddhodhana of the Kshatriya clan. He was named Siddhartha. After his marriage, Gautam Buddha left his child Rahul and wife Yashodhara and started his journey on the path of liberating the world from attachment and misery.

The Kalki avatar is considered to be the last incarnation of Lord Vishnu. According to the Kalki Purana, the ‘Kalki avatar’ of Shri Hari will be at the end of Kaliyuga. After that, all sins and bad deeds will be destroyed from the earth.

Importance of Rituals That Positively Impact On Your Life

Importance of Rituals That Positively Impact On Your Life