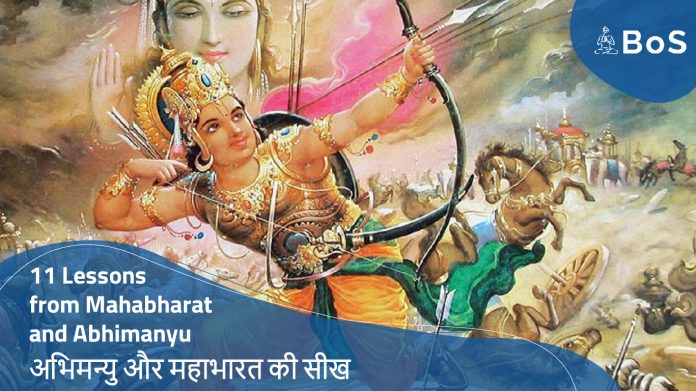 Mahabharat Abhimanyu story: The Abhimanyu Story of getting caught in the chakravyuha during Mahabharata war is very famous and popular. Abhimanyu was the son of Arjuna and Lord Krishna’s sister Subhadra. When he heard the news of the war, he too came to Kurukshetra to help his father and uncles. One day during the war, Dronacharya, the commander of the Kauravas, created the Chakravyuha. Apart from Shri Krishna, only Arjuna knew the art of penetrating Chakravyuha. Arjuna not only knew the entry into the vyuha, but he also knew the trick to destroy it and get out from there. But Abhimanyu only knew the method of entering into the vyuha, which he had heard from his father while he was in the womb of his mother. It was mandatory to break the vyuha and Arjuna was at the other end of the battle ground.

A great example of valor, intelligence and courage is the heroic Abhimanyu Story of the Mahabharata Era.

We all know about Mahabharata how truth had won this war. But did the Mahabharata become just a story for us. No, Mahabharata is an ocean of knowledge from which we can make our life successful by gaining knowledge. Although the present times belong to the Kaliyuga, but even today there are many situations when the lessons learned from the Mahabharata help you to make decisions easily.

At the core of the Mahabharata war is a sense of revenge. The craze of ruining the Pandavas took away everything from the Kauravas. Even children were killed in this war. But could the Pandavas survive this destruction?  No! In this war, Arjuna’s son Abhimanyu was killed along with Draupadi’s five sons.

It is said that incomplete knowledge is the most dangerous. An example of this is Abhimanyu ki kahani. Abhimanyu was a very brave warrior of Mahabharata but everyone knows about the circumstances in which he died. In times of trouble, an incomplete knowledge of anything is of no use. You should be proficient in your knowledge. There must be proficiency in any one subject for sure.

Abhimanyu ki kahani teaches us to stand against wrongs with boldness to protect our family. During the war of Mahabharata, Abhimanyu sacrificed his life to save his family and this proves his care and affection towards his family.

Do you know why Shri Krishna did not stop Abhimanyu’s death? The reason behind this is that Arjuna was reluctant to cut off the war with the Kauravas because they were all his brothers, although the war was going on, but Arjun’s heart was distracted in fighting against his own people. In such a situation, the death of Abhimanyu reversed this entire war. While distraught over the death of his son, Arjuna forgets all the other things and comes to war with perseverance. It is said that this was Shri Krishna’s war policy.

Abhimanyu is the character of Mahabharata who had respected his parents and other Pandavas since childhood, was the son of Lord Krishna’s sister Subhadra and Arjuna. This teaches us to respect our Parents and elders always because they are the one who helps us to stand in our life and teach us to move forward towards our life goals.

During Mahabharata, Abhimanyu took the wheel of his chariot for his protection and took a sword with his right hand. He killed warriors of the Kauravas in an injured state too. After this, Abhimanyu’s sword was also broken by the Kauravas and shattered the wheel of the chariot in his hand. Now Abhimanyu was completely unarmed but still he did not give up and he continued to confront the Kauravas. This teaches us that even in tough situations of life, we should never lose our strength.

Only the education and work ability acquired by a person comes into his life. Abhimanyu’s passion for both should be achieved by everyone in their life as he started gaining knowledge from the womb of his mother. If you are obsessed with your work then no obstacle can stop your path.

Life is a long journey and in this it is very obvious that we are going to see triumph and failure in this journey. Don’t lose hope due to failures, have strength to accept failure with dignity as Abhimanyu did in the war of Mahabharata.

Thus came the end of the life of the brave Arjuna son, Abhimanyu. On the go, Abhimanyu Stories taught us that no matter how bad the situation is, one should face them with patience. Winning a war in this world is not only called superiority, even those who show their jeweler in war are seen with respect in the world. That is why you should live your life like a warrior so that the goal is achieved or not, you must have a separate identity in the society like Abhimanyu.